There is a growing consensus surrounding reforms at the two-year college level, and the conclusion is that holistic reform is most effective. This means that any reform that intends on seriously moving the needle will require a rather large number of integrated parts, a thoughtful implementation of those parts, and substantial funding. The City University of New York’s (CUNY) Accelerated Study in Associate Programs (ASAP) model is probably the best example of effective holistic reform (City University of New York, 2016; Miller et al., 2020; Scrivener et al., 2015).

However, how does an institution begin to implement holistic reform? Should they scrap most of what they are doing and start anew using another institution’s plan that has been proven to work? Should they instead implement new reforms in a piecemeal fashion?

This is where spectrum thinking could be useful. When applying spectrum thinking to education, it means that individual reforms could be put on various spectrums. For instance, on one side of a spectrum could little to no implementation of holistic reform components, which means reforms are either not there or very disconnected, and on the other side of this spectrum would be fully integrated implementation. Moving toward the side of the spectrum that is full implementation is the goal, but supporting all existing reforms while implementing new ones is crucial. Moreover, integrating as many components as possible is equally important.

ASAP’s various components could be used as an example of one type of spectrum. In order for ASAP to be successful, CUNY had to implement many moving parts. Below is a graphic which contains most of the reforms, and they are not in any order. 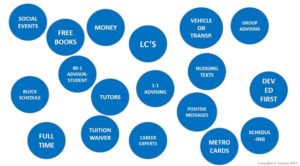 When applying spectrum thinking to all these reforms, the best process an institution could use would be to first identify what reforms they are currently employing. Then, the most important aspects of the package could be placed on a spectrum. Finally, the institution could implement reforms carefully with full support, one at a time, while at the same time supporting the programs and initiatives they are already implementing well. That way, no one reform overshadows another piece of the puzzle, thus harming the whole. Integrating them all would be a goal along the way.

What this might look like conceptually can be seen below. What institutions should do is move from a model of partial integration (top) to near full integration of holistic reforms (bottom). 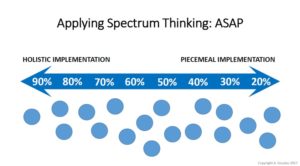 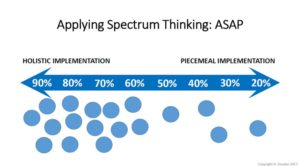 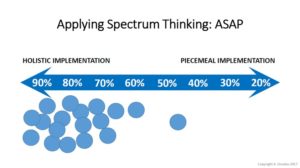 Spectrum thinking in ASAP’s case would consider almost all reforms equally, though some of the reforms could be considered more important than others if leaders wish. Institutions would have to decide for themselves which are most important, which are easiest to implement, and which are economically feasible for their particular situation.

However, other reforms, such as online learning, would need to be put in a different type of spectrum before implementation is considered. The problem with online learning in two-year public colleges particularly is that not all types of online reform models are equal. In this case, then, the different variations should be put into a spectrum of most effective to least effective. Then an institution should consider moving toward the most effective side of the spectrum when possible.

Below is an overview of all the models that involve online learning and modules, with face-to-face being the only exception (this being the standard alternative to any online model). 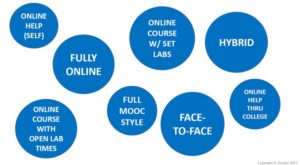 When assessing the various models above, leaders may wish to consider that multiple studies show that for community college students, fully online courses may not be the best option.

Indeed, Bailey et al. (2015) recommend that institutions should not increase the use of fully online courses to save money. They find that it reduces completion rates and harms quality:

Community colleges are experiencing fiscal pressure and continue to look for ways to lower costs. Yet the ways in which they typically cut spending—by increased reliance on part-time instructors, increased student-teacher ratios, and growing use of fully online instruction—reduce completion rates and likely hurt quality. (p. 197)

Taking into consideration the other variations for online learning, institutions could consider passrates of each model and put them into a spectrum. Below is a chart which provides a spectrum of online learning models and their approximate passrates according to research. 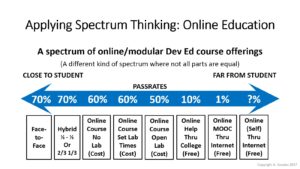 Perhaps the goal, then, of a spectrum thinking approach for online models would put the face-to-face model, as well as the hybrid model, at the most effective end of the spectrum. Then institutions would decide to move as many courses as possible in that direction.

Any reform that contains multiple components could be subjected to the process of spectrum thinking. To take a more recent and popular reform, one could consider corequisites as part of a spectrum (Belfield et al., 2016; Cho et al., 2012; Jenkins et al., 2010). Below are the key components of a successful corequisites program, in no particular order. 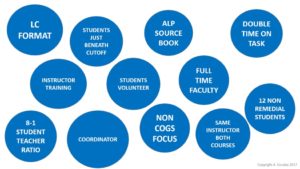 Similar to ASAP, these reform components are essentially equal, so moving toward the fully integrated side of a spectrum is optimal. This means that as many of the above components should be implemented and integrated as possible.

Finally, reforming a systematized and fully integrated intake system could be done with spectrum thinking. Below are some typical components of intake systems at community colleges. 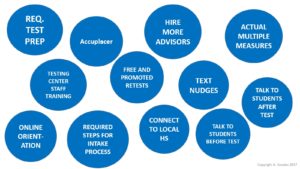 Unfortunately, due to staffing and funding constraints, some of these effective components are missing or incomplete at many institutions. At other institutions, most of these components are disconnected and students fall through the cracks as a result. Leaders would do well to move toward full and integrated implementation of as many of these as possible.

For example, if multiple measures are going to be utilized, then a process of using actual multiple measures should be invested in, and the resulting score should be applied to student placement in a timely manner. This means that students who take the Accuplacer test should already have their HSGPA submitted, they should have had test prep before the Accuplacer, and they should be able to sit down with an advisor immediately after obtaining their placement test results. This is to prevent students from registering for courses below their placement, especially if a decision-zone placement system is employed by an institution.

Spectrum thinking is a framework for approaching the application of reform. It allows leaders in an institution of postsecondary education to assess and place reforms along spectrums. One type of spectrum could be the reform’s efficacy, such as online learning (Jaggars, 2011; Vigdor & Ladd, 2010; Warschauer & Ames, 2010). Another one could simply be an institution’s ability to implement new components, as in intake or placement processes. In other words, if free placement retakes and registration text nudges are easy for an institution to implement, those reforms could be put at the end of a spectrum of low-hanging fruit. Then other components would be pushed to that end when the institution gets more funding.

Regardless of the type of spectrum, the optimum side of it should be full and integrated reform. The other side is piecemeal and unconnected reform. Of course, our goal would be to move consistently and thoughtfully toward integrated, holistic reform.

Just like an effective educator might plan their entire semester’s curriculum backwards, starting with the end goal, and then working through units and lessons that meet that end goal, institutions can set an ideal and move toward it. The result is that the sum total of a system of integrated and holistic reform would be greater than the sum of the individual parts. When existing reforms are supported, and new reforms are implemented thoughtfully with data and are connected to existing reforms, the entire system works more effectively. Then we can begin to move the needle.